How to set up a second router in your home

Sometimes it's useful to have a second router in your home. For example to improve wireless connectivity on another floor: you then place a second wireless access point.

Or to supply internet connection to a desktop computer on the attic, when the distance is too big for a normal wireless network card an there's no networking cable either: you can then deploy a wireless ethernet bridge.

Below I'll explain how to do that.

Before you go ahead: first consider whether a reduction in electromagnetic radiation might not be a better idea for your health....

Deploying a second router is technically a far better approach, because then you do preserve your entire bandwidth.


There can only be one captain

1.1. To get that second router to operate as a second wireless access point for your internet, you usually have to adapt its settings, or it won't work. Because a network is designed by default to have just one router: that's the machine that allocates IP addresses to the connected computers. The router is the "captain" of the network, and there can only be one captain.

But when they both have their IP range at 192.168.1.x, which is by default usually the case, then router 1 blocks router 2. The solution is simple: just separate the two IP address ranges. Below I'll describe how to do that.

1.2. Router 1 should simply be deployed as usual, as if there were no second router at all. When you already have an operational router: don't change anything for it!

1.3. Take a computer that's not connected to the internet, neither wireless nor wired. It should have no connection at all to router 1.

You can see an example of router 2, on the screenshot of a TP-Link router below: 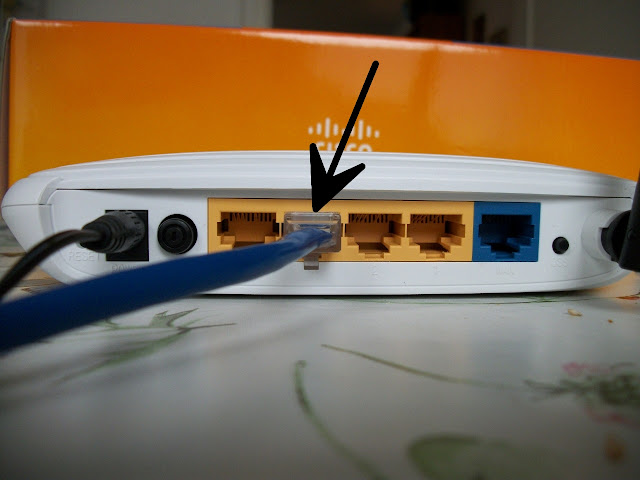 On the computer, you then call up the configuration panel of router 2, by means of your web browser (Firefox, Chrome, ....). For example: for Linksys routers this settings panel is usually at "web page" 192.168.1.1

See the screenshot below, of a TP-Link router (click on the image to enlarge it): 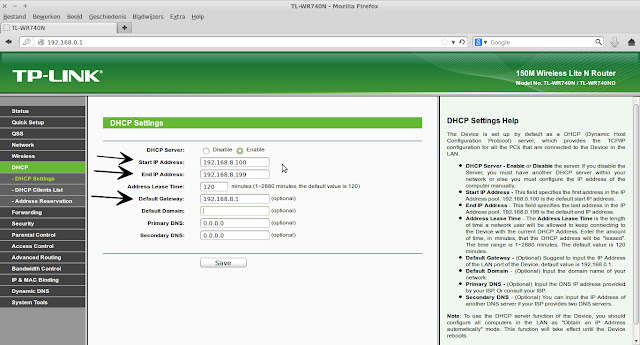 For this particular TP-Link router you have to make sure that in the section DHCP Settings, the items Start IP Address, End IP Address and Default Gateway are all set to 192.168.8.x.

But for some routers, amongst which those of Linksys, you only have to change the Local IP Address in the section Basic Settings, from 192.168.1.x to 192.168.8.x. The rest of the settings are then automatically being changed accordingly, by the operating system of the router itself. Even easier...

- Make sure that both wireless routers don't transmit on the same channel, because then you might lose signal strength because of the interference. Channels that are at least five channels away from each other, like 1, 6 and 11, don't overlap at all and therefore don't interfere with each other's signals.

- Disconnect router 2 from the computer (physically, so unplug the ethernet cable).

- Move the ethernet cable in router 2, from the ethernet (LAN) port to the WAN port (sometimes called: internet). See the screenshot below of router 2: 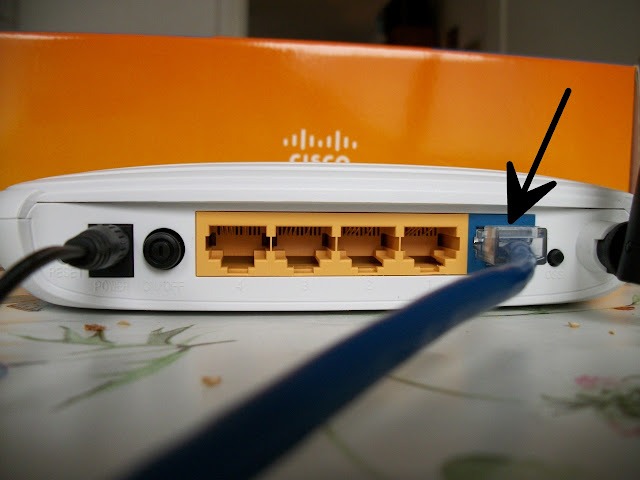 - Now plug the other end of that ethernet cable, into one of the ethernet (LAN) ports of router 1 (any ethernet port will do). See the screenshot below of router 1, a Linksys router: 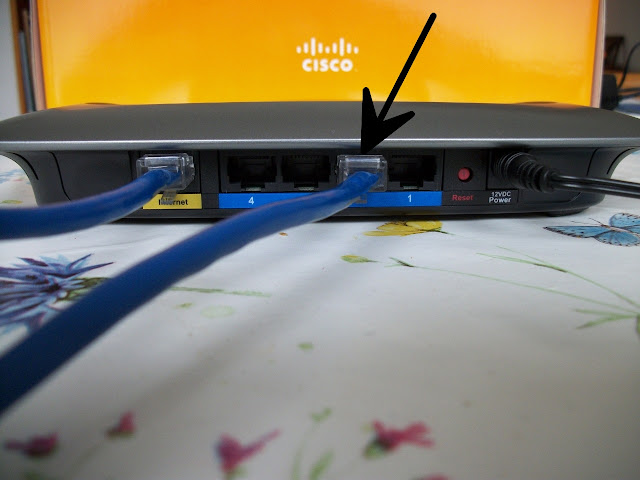 You're done! You now have a fully functional second wireless access point.

Off topic: is your wireless security OK?

This is what an ethernet bridge is about: it turns your router into a wireless adapter.

The interesting part is, that the internet enters the bridge wirelessly, and is being transmitted by wire to the computer. The world upside down....

For this, you set up router 2 as follows:

- Set the encryption to WPA with AES, and make sure that router 1 is set to that as well, because they have to match exactly. Note: WPA2 won't work!

- Make the SSID of router 2 identical to that of router 1.

- Make the network key (password) of router 2, identical to that of router 1.

- Make sure that router 2 transmits on the same fixed channel as router 1 (for example: 6). Note: ensure that both routers transmit on a fixed channel, and use no dynamic channel).

- Set router 2 to the wireless ethernet bridge mode. Not all router firmwares allow for that; in any case it's possible when your router is running on Tomato or DD-WRT. See the screenshot below (click on it to enlarge it): 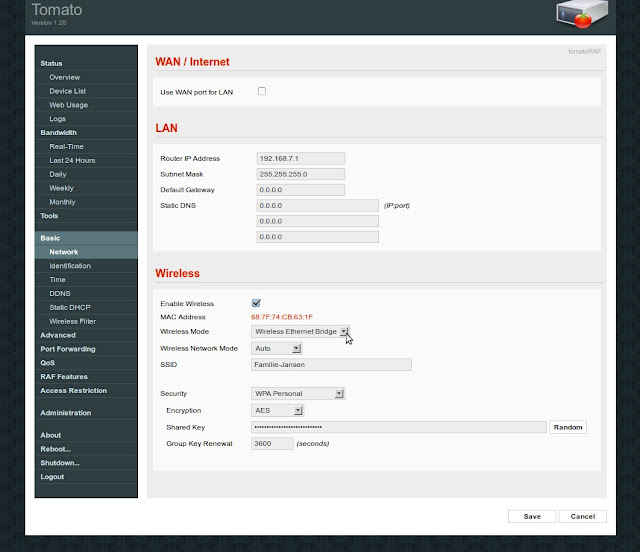 But even on a cheap router like the TP-Link WR740N, you can use the default firmware to turn the router into a wireless ethernet bridge. See the screenshot below (click on it to enlarge it): 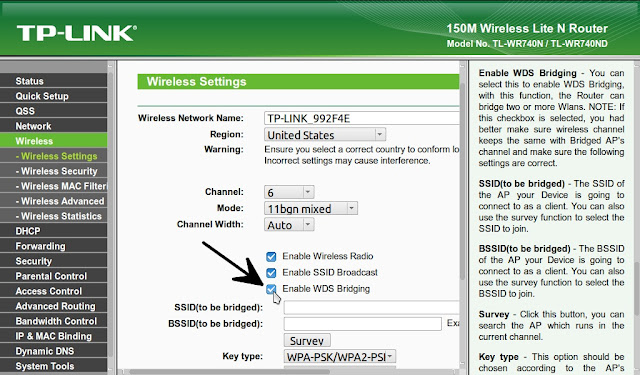 Now connect router 2 by means of an ethernet cable to the computer that needs internet. Note: in router 2, do not plug the cable into the WAN port (sometimes called: internet), but into one of the four ethernet (LAN) ports!

You're done! The computer now has "wired" internet connection. Router 2 has technically become fully transparant; it has become a wireless adapter.

Tip: do you need a wireless network in the vicinity of router 2? Then simply attach a third router to the "bridge" router 2.

- plug the ethernet cable from router 3, into an ethernet port (LAN port) of "bridge"router 2;

- treat router 3 essentially as if you were connecting a second router to router 1 (see item 1.3 on this page). So take care that the IP range of router 3 differs from both other routers. Set it for example to 192.168.5.100.

Off topic: is your wireless security OK?

3. Do you want more tips and tweaks? There's a lot more of them on this website!

The tips and how-to's on this website are primarily written for Linux Mint 20.2. But you can also use them in Ubuntu 20.04.x, provided that you do this first (*click*).