Select the right Ubuntu version for you

That's because 20.04 is LTS (Long Term Support) and of enterprise quality (extra reliable and extra stable). The next LTS version will be 22.04, which will be released in April, 2022.

Intermediate versions (standard releases, version numbers for the coming period: 20.10 to 21.10) only receive security updates for a mere nine months. But LTS versions for a generous five years.

See this graph of the life cycle of Ubuntu versions (click on the image to enlarge it): 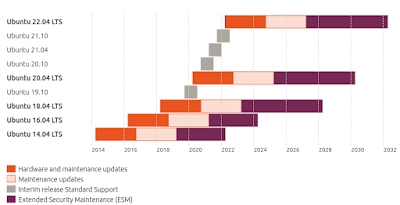 Intermediate versions (interim releases) are not bad, but 20.04 LTS is simply much better. The difference between consumer quality and enterprise quality....

The lead developer and founder of Ubuntu is Mark Shuttleworth. This is what he says about this:

"Our working assumption is that the latest interim release is used by folks who will be involved, even if tangentially, in the making of Ubuntu (read: developers and testers), and LTS releases will be used by those who purely consume it (read: you and I)."

You may temporarily have to choose a newer intermediate version though, when you have very new hardware that's too new for the most recent LTS version. That's because the drivers for the hardware are in the kernel, which is the core of the operating system. Only the latest Ubuntu has the latest kernel, and therefore the latest drivers.

However, a newer intermediate version has in this respect only a temporary advantage over Ubuntu 20.04 LTS: an LTS version of Ubuntu receives in the first two years of its existence, every six months the newer kernel of the most recent intermediate standard version. This is done by means of a so-called "point release" or "dot release". See this announcement.

Since Canonical releases LTS versions with a two-year interval, you can always choose to "go LTS". No matter how new your hardware is. As far as support for new hardware is concerned, there's only a temporary difference of a few months between the latest LTS version and more recent intermediate standard versions.

With Linux Mint you won't have to pay attention to this matter: nowadays, Linux Mint only uses LTS releases of Ubuntu as foundation.

Not five years, but three years

2. The five years support period for Ubuntu LTS (and for the Linux Mint that's built on it) isn't quite correct. The full five years support with security updates, is only valid for the software that comes from the company that produces Ubuntu (Canonical) itself.

For the experienced Linux users: the software in the repository "Main". Besides the operating system as such, this contains applications like Firefox and Libre Office.

Although "Main" contains most of the software of the default installation of Ubuntu, it doesn't contain all of it. A smaller part of the default software comes from the repositories (software sources) "Universe" and "Multiverse", and those are being maintained by the Ubuntu community. Not by the company Canonical.

They contain several popular applications and things like multimedia support.

What's in "Universe" and "Multiverse", is sometimes supported for less than five years. If shorter, then usually three years at most. That's why it's wise to use an LTS version of Ubuntu for "only" three years maximum.

Before those three years are up, you can upgrade to the new LTS, because every two years a new LTS is being released. The best upgrade moment is the release of the first point / dot version of the new LTS ("Service Pack 1"), for example 20.04.1, because by then the inevitable teething troubles of the new LTS will have been fixed.

Note that I'm not claiming that using your Ubuntu LTS for the full five years, is insanely irresponsible. Far from it. The practical risks pertaining to potentially poorly maintained packages in Universe and Multiverse, are generally not so big. The really critical stuff (web browser, email client, etc.) is thankfully usually in the well-maintained Main.

So: is it reasonable to use your Ubuntu LTS for the full five years? Answer: yes. But is it more secure to upgrade after three years? Answer: again yes. That's just a small extra effort, so why not spend that small effort?

3. Ubuntu comes with the Gnome desktop. Some love it, others not so much. If you prefer a more classical desktop, Xubuntu is your best choice.

4. Does your computer have an old processor without PAE support? For many non-PAE processors from the Intel Pentium M series and Intel Celeron M series, PAE support can be forced. Which makes them fit for Ubuntu and Linux Mint after all.

Linux Mint is easiest in this respect: you can force PAE upon such a processor by selecting Start with PAE forced in the boot menu from the Mint DVD. You can make that boot menu visible by interrupting the automatic boot, by hitting the space bar during the countdown.

6. You can get a free copy of Ubuntu here.