Grub Customizer: why you shouldn't use it

1. There's a third-party tool called Grub Customizer, which massively complicates your bootloader. It heavily changes the contents of the system folder /etc/grub.d, which is where important parts of Grub reside. These changes don't disappear, when you remove Grub Customizer after using it!

In that system folder, Grub Customizer changes files into so-called "proxified" files, which creates a complex and unclear situation. This additional thick layer of complexity may have something to do with the problems it can cause: the more you complicate something, the bigger the risk of failures....

The main problem with Grub Customizer in a nutshell: as long as it works as expected, all is fine.

But when there is a problem, removing it and trying to boot without it can create big difficulties. Because the program has done major changes in /etc/grub.d, which would all have to be undone manually. For uninstalling Grub Customizer after using it, does not remove its changes.

That's the downside of the complexity it adds. And for what? For a few things, most of which are non-essential, that can usually also be done without adding a thick layer of complexity....

Grub Customizer (grub-customizer) may look easy and nifty, but can mess up a vital part of your operating system. Your bootloader is as vital as it gets: after all, a system that won't boot anymore, is useless.

Furthermore, most of what Grub Customizer does can also be achieved by other means, without adding thick layers of complexity "under the hood".

Unfortunately, Grub Customizer was present in the official software repositories (in the Universe repo), for several Ubuntu/Mint versions. But thankfully it has been deleted from that repo in Ubuntu 22.04 / Mint 21.

Just to make this clear: I mean no disrespect towards Daniel Richter, who is the author of Grub Customizer. I have no doubt that he's a highly skilled programmer and very good at his job. I just think that Grub Customizer is based on a fundamentally wrong technical concept.

If you're interested in the details: below, you'll find the results of my test of Grub Customizer.

I ran a test in a virtual machine with Linux Mint 20 MATE (which is built on Ubuntu 20.04). In it, I installed Grub Customizer 5.1.0-2 from the official Ubuntu repo (Universe). Single boot of course, no other operating systems. But I changed the menu order of the installed kernels somewhat, I set a nice background for the Grub menu and I set the startup delay to 5 seconds. Then I saved the settings.

This is a clean original /etc/grub.d, before using Grub Customizer (click on the image to enlarge it): 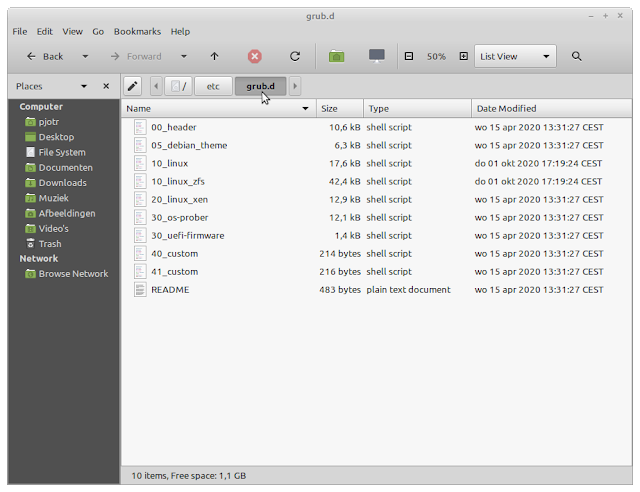 And this is /etc/grub.d, after using Grub Customizer like I described. It shows three new folders (click on the image to enlarge it): 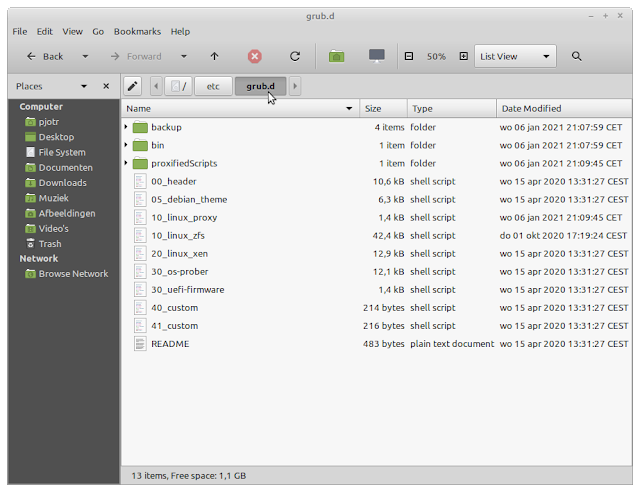 Note the file called linux in the new folder proxifiedScripts (click on the image to enlarge it): 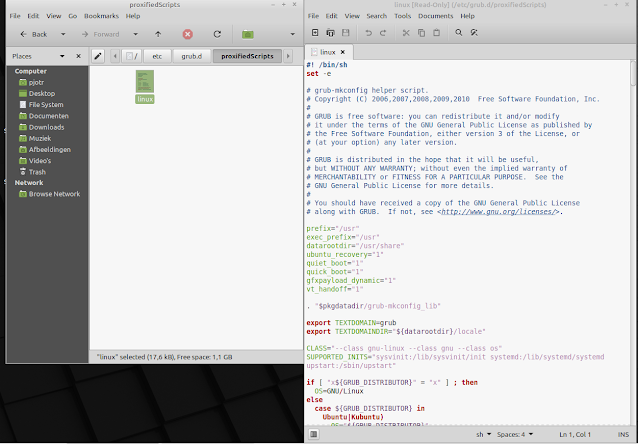 Grub Customizer has put the entire contents of /etc/grub.d into the backup folder, which can only mean that the original contents have been changed (click on the image to enlarge it): 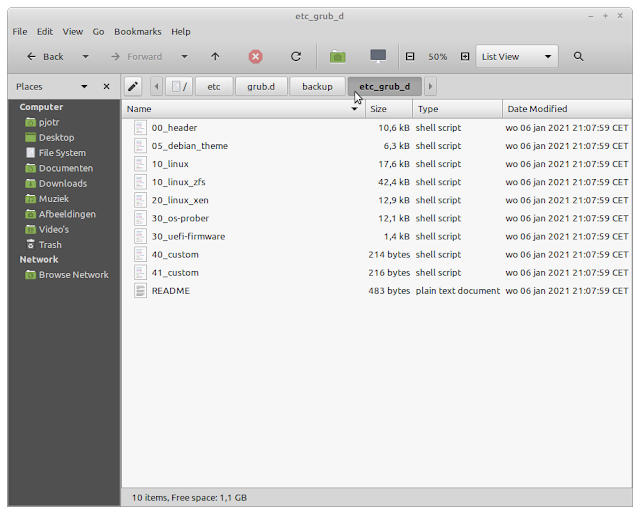 The same with /boot/grub (click on the image to enlarge it): 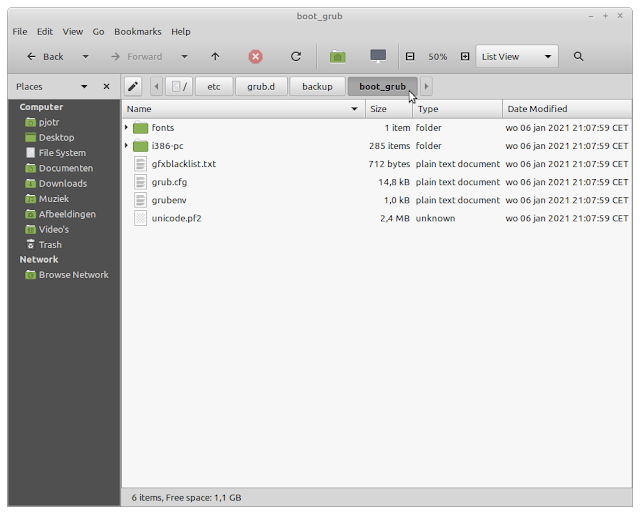 How to undo the complications that Grub Customizer has afflicted

2. If you're a victim of Grub Customizer, you can restore a Timeshift snapshot in order to get rid of it. If you don't have such a snapshot I advise to let it be, as long as it works....

When you have no Timeshift snapshot and you wish to get fully rid of Grub Customizer anyway, a fresh clean re-installation of your Linux Mint or Ubuntu is the best solution. Because in my test I was unfortunately unable to undo the damage done by Grub Customizer in any other way (which includes applying the "undo" instructions provided in a text file created by Grub Customizer itself).