Libre Office Writer (or LibreOffice Writer, as the official spelling unfortunately is), is a fine word processor. An excellent alternative to Microsoft Office Word. However, it does have a couple of sub-optimal default settings. Luckily, those can be changed. Read on below.

1. Some AutoCorrect options are highly irritating, so it's better to limit AutoCorrect somewhat.

Remove both ticks for:

Capitalize first letter of every sentence

Delete spaces and tabs at beginning and end of paragraph

Delete spaces and tabs at end and start of line

Remove the ticks for:

Double-click the section "Load/Save", so that it expands - General - Save:
set the "Save AutoRecovery information" interval to 5 minutes instead of the default 10 minutes.

That way, you'll reduce the risk of data loss in case of power failure and such.

3. Have you installed Java? The performance of Libre Office can be enhanced greatly, when you disable Java in it. This will disable a few features, but usually you won't even miss those. Proceed like this:

4. By default, it's pretty cumbersome to add page numbers. Luckily, some helpful developer has provided a useful extension, called Pagination. This extension makes adding page numbers a lot easier. It's old, but should still work in the current versions of Libre Office.

Like this you can install it in Libre Office Writer:

a. You need the "latest" version of Pagination (a .oxt file) from the website of the related project Open Office (Libre Office is built on that). You can download it from this webpage. Website down? That wouldn't be the first time. Then get Pagination from my Google Drive.

Click Add - and click your way through to Pagination-xxx.oxt in the Downloads map. Upon adding, it installs itself in Libre Office.

Now you can find the page numbering feature in the toolbar of Libre Office Writer: Insert - Page Number...

See the screenshot below: 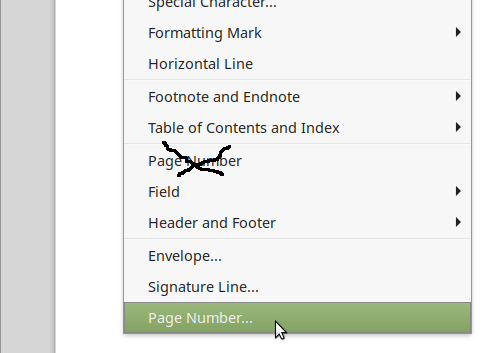 See the screenshot below of the correct settings: 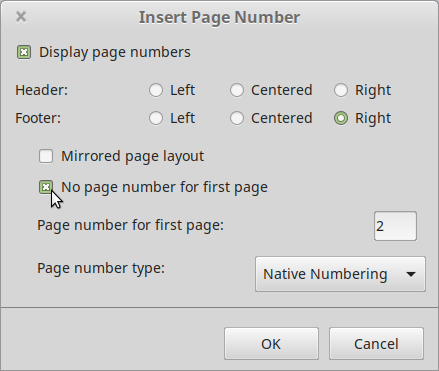 g. The installation of Pagination is a user preference, so repeat this in each user account.

Note: do not turn Libre Office into a Christmas tree! Be very reluctant to install extensions. The more extensions you install, the slower Libre Office will become (and the less stable).

5. Macro's can be useful, but they're also risky. You can improve the macro security of Libre Office like this:

From the menu, launch LibreOffice Writer - panel: Tools - Options...
If necessary, click on the small triangle before the word LibreOffice, in order to expand this section - Security - button Macro Security... - set the Security Level to Very high.

Note: user preference, so repeat this in each user account.

6. Install some useful fonts, in order to improve the compatibility with documents from Microsoft Office. Namely a package containing some old Microsoft fonts and two modern Google-made free replacement fonts.

I. First the package with old Microsoft fonts:

b. Use copy/paste to transfer this line into the terminal (it's one single huge line!):

Press Enter. With this command, you download the installer package from Debian, because the version in the Ubuntu/Mint repositories is broken. Furthermore, the Debian package is cleaner because it doesn't pull some software that's useless in Linux Mint.

c. For the actual installation, use copy/paste to transfer this line into the terminal (it's again one line!):

c. Now you might be confronted by a license agreement from Microsoft (sigh). See the screenshot below (click on it to enlarge it): 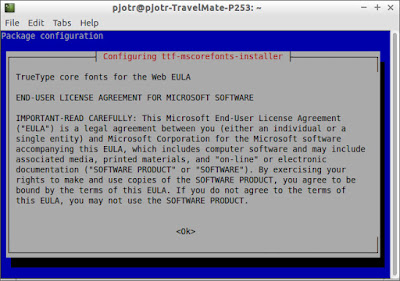 Hit the Tab key to activate <Ok> (which then turns red), and press Enter.

d. In the next window you'll be given the chance to say Yes to the agreement: hit the Tab key to activate <Yes> (which then turns red) and press Enter.

e. Finally, copy/paste this command into the terminal:

Use copy/paste to transfer this line into the terminal (it's one line!):

b. Now you're going to configure Libre Office to use them as replacement for the Calibri en Cambria fonts from Microsoft:

Press the button with the green tick.

Tick: Always and Screen only

Press the button with the green tick.

Tick: Always and Screen only

7. Sometimes there are wrong "hidden characters" in a document. You can find and replace them as follows.

A superfluous space kan be found and replaced as follows:
Click in the search field and press the space bar once. Leave the "Replace with" field empty. Click the button Replace.

Finding and replacing a hard return (hard line end) is a little more complicated. In the search window, click the button called "Other options". Then tick "Regular expressions".

8. Usually, I'm opposed to adding external software repositories like PPA's. But there are favourable exceptions, and the PPA for Libre Office is one of them.

It's much better to use packages from this PPA for that purpose, than to use the *.deb files that The Document Foundation provides upstream. Because those are intentionally built against a very old baseline for maximum compatibility, which is a disadvantage for modern operating systems like Linux Mint 20.x.

So, if you want to install a newer version of Libre Office, do it with this PPA, not with the upstream *.deb installers from The Document Foundation.

Note: although this PPA is reliable, don't apply this how-to just to have the "latest and greatest"! Only do it when you encounter a problem in your current version of Libre Office, which might be solved in a later version.

This is how to do it:

a. Close all Libre Office applications.

b. If present, remove the PPA of an older version of Libre Office, from your sources list. As follows:

d. Use copy/paste to transfer this line into the terminal (it's one line!):

e. Now copy/paste the following command line into the terminal:

f. Then remove the Firebird packages which you might have gotten as well (they're not present by default in Linux Mint, so you probably won't need them). With this terminal command (copy/paste it):

g. Launch Libre Office. You should now have a newer version.

Note: there's also a Libre Office PPA (LibreOffice Fresh) which always immediately gives you the latest version. I don't recommend to use that PPA,  because the risk of problems is bigger.

The PPA which I do recommend gives you newer versions that have already "matured" a bit. This reduces the risk of diminished stability and reliability considerably.

Problem with a Microsoft Office document? Use OneDrive

9. Does Libre Office have a problem with a complex Microsoft Office document? Then open that document in the free cloud service One Drive.

In the free edition of Microsoft OneDrive there are basic editions of Word, Excel and Powerpoint, called Office Online. With those you can open, edit and even create documents.

In my opinion Libre Office is a far superior tool, but in certain cases using Office Online can be a useful emergency measure.

Yet it remains an emergency measure, because you more or less "hand over" your document to Microsoft: in principle, that company can read your OneDrive documents....

10. Do you want more tips and tweaks? There's a lot more of them on this website!