Linux Mint: how to select the right flavour for you

When you seek an alternative for Windows, then Linux Mint is definitely an excellent choice!

Linux Mint is derived from Ubuntu Linux (Ubuntu is being used as raw material) and is squarely aimed at the home user. Ease of use is first and foremost. It's just as easy to operate as Windows 7, and a lot easier than Windows 10 or 11.

You can play your music and movies almost right away, because full multimedia support can be installed with just a few mouse clicks.

Linux Mint is also entirely free of cost: Linux Mint doesn't generate any direct sort of income. It's funded only by sponsoring, donations and advertising on its website and support forum.

You can install Linux Mint as many times as you want, on as many computers as you want. No restrictions, no costs.

Information for advanced Linux users: nowadays, Linux Mint is exclusively built on the Ubuntu versions with the highest quality. Namely the LTS versions.

1. Below you see three screenshots of Linux Mint 21.1 (code name: Vera), with the desktop environments Cinnamon, MATE and Xfce.

The beautiful and elegant desktop of the flagship: main edition Cinnamon, with expanded menu (click on the image below to enlarge it): 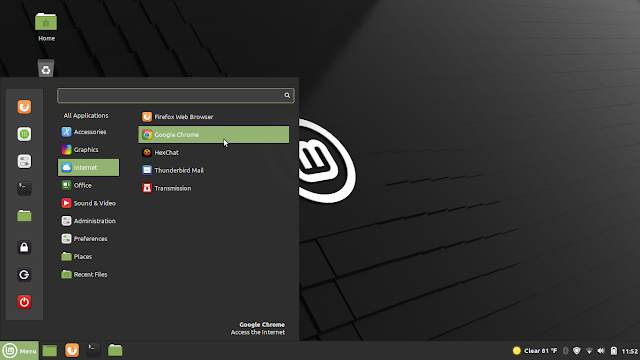 The attractive traditional desktop of MATE, with expanded menu (click on the image below to enlarge it): 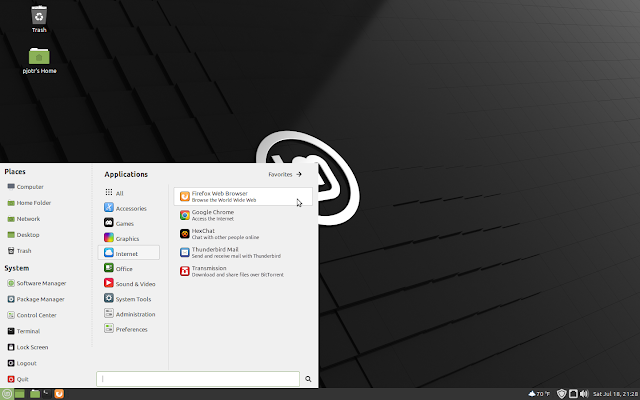 The nice clean desktop of lightweight Xfce, with expanded menu (click on the image below to enlarge it): 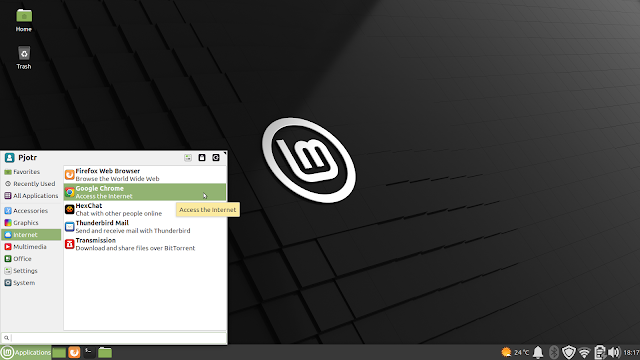 How to pick your flavour: Cinnamon, MATE or Xfce

2. Mint's own desktop environment comes in the two major flavours Cinnamon and MATE, and in the minor flavour Xfce.

Cinnamon is the most advanced and modern desktop of Mint, and is rightly considered to be its flagship. It's easy to use, yet fast, sophisticated and slick.

Cinnamon is based on the modern Gnome 3 and it's (when running without too many three-dimensional visual effects) stable and reliable: it has been improved a lot in the last couple of years.

Cinnamon is relatively heavy on the system resources, especially when many visual effects have been enabled (by default, only a few are enabled). Big advantage: it's definitely the best-looking of the Mint desktops!

My advice is: when in doubt, select Cinnamon.

MATE (pronunciation: mahtay, because it's named after the South American beverage Maté) is a successful attempt to continue the former Gnome 2 desktop. This makes Mate simple and intuitive to operate. Furthermore, MATE is fast, stable and reliable.

It may look a bit old-fashioned and less sleek in comparison with Cinnamon, but that's intentional and stems from the wish to keep the "old" Gnome 2 desktop alive. The developers have transitioned it to a modern code base, so MATE has a long-term future as well.

Xfce: the Xfce edition is much more lightweight than both MATE and Cinnamon. Therefore it's very suitable for older computers.

"My" minimal system requirements for Mint are as follows, split into reasonable performance (usable) and smooth performance.

4. Nowadays, 64-bit is the norm. 32-bit is disappearing all over the globe; support for 32-bit is crumbling everywhere.

Most important Linux distributions (Linux Mint included) don't even make a 32-bit edition anymore. This is happening with applications as well: for example, the makers of web browser Google Chrome have also stopped making a 32-bit edition for Linux.

So I advise to choose 64-bit whenever reasonably possible, because that's the future and it unleashes the full power of your hardware.

5. Does your computer have an old processor without PAE support? For many non-PAE processors from the Intel Pentium M series and Intel Celeron M series, PAE support can be forced. Which makes them fit for Linux Mint after all.

You can force PAE upon such a Pentium/Celeron M processor by selecting Start with PAE forced in the boot menu from the Mint DVD. You can make that boot menu visible by interrupting the automatic boot, by hitting the space bar during the countdown.

6. In short: do you have a computer that was sold with a pre-installed Windows XP or Windows Vista? Then Linux Mint 20.3 is sometimes your best choice. Preferably the lightweight Xfce edition.

Do you have a modern computer that was sold with a pre-installed Windows 10 or 11? Then Linux Mint 21.1 is definitely the best option for you. Because Mint 21.1 is optimally suited for modern hardware.

Linux Mint Debian Edition: not for beginners and not for production machines

7. Mint also has an edition that's not based on Ubuntu: Linux Mint Debian Edition (LMDE).

In itself LMDE is a good product. But LMDE is less mainstream than Linux Mint, it has a much smaller user base, it's not compatible with Launchpad PPAs, and it lacks a few features. That makes it somewhat harder to use and harder to find help for, so it's not recommended for novice users.

Furthermore, the focus of the efforts of the Mint developers is of course on the main Mint edition. LMDE is therefore not advisable for machines that need to function well at all times. For those machines Mint's main edition is more suitable.

8. Do you need a lightweight version of Linux Mint, for example for an older computer? Then choose the edition with the Xfce desktop environment.

You can check the integrity of the iso that you've downloaded, in the following manner.

Burn the downloaded iso in the right way

10. You have to burn the downloaded iso to a DVD in a special way.

How to install Linux Mint alongside Windows (dual boot)

11. Installing Linux Mint alongside Windows, in other words creating a dual boot system, is easy. That way you can always choose which operating system to boot, each time you power on your computer. This is how you create a dual boot.

What to do right after installation

12. Out of the box, Linux Mint is very complete. Yet there are some things that you can do right after installation, which will make it even better.

I have divided the actions into three categories:
- the absolutely essential ones (part 1);
- the recommended ones (not essential, part 2);
- the maybe useful (part 3).

You can find the to-do lists here:

13. The main differences between Ubuntu and Linux Mint are the following:

a. Mint has some tools of its own, which are sometimes very useful.

b. Multimedia support in Linux Mint is a bit easier to complete.

c. Mint puts even more emphasis on stability and reliability than Ubuntu does: the key tool for that is Mint's Update Manager.

However, these differences in stability and security are small, so there's no need to let them influence your choice! Both Mint and Ubuntu are by default very stable and secure, and both offer enterprise grade safety and reliability.

d. Most importantly: the main edition of Mint has its very own desktop environment (Cinnamon). This looks somewhat like the desktop and menu of Windows 7. This is also true for two other Mint editions: MATE and Xfce.

e. Mint releases only LTS versions which get updates for up to five years; Ubuntu releases both LTS versions and short-lived intermediate versions.

Not quite five years of support

14. The five years support period for Linux Mint isn't quite correct. The full five years support with security updates, is only valid for the software that comes from the company that produces Ubuntu (Canonical) and from Mint itself.

For the experienced Linux users: this means the software from the repositories (software sources) "Main" and from the one that carries the name of your Mint version (e.g. "Vera"). Besides the operating system as such, these contain applications like Firefox and Libre Office.

Although "Main" and the Mint repository contain most of the software of the default installation of Ubuntu or Mint, they don't contain all of it. A smaller part of the default software comes from the repositories (software sources) "Universe" and "Multiverse", and those are being maintained by the Ubuntu community. Not by the company Canonical nor by Mint.

What's in "Universe" and "Multiverse", is sometimes supported for less than five years. If shorter, then usually three years at most. That's why the most cautious approach is to use a Mint series (e.g. 21.x) for "only" three years maximum.

Note that I'm not claiming that using your Mint 21.x for the full five years, is insanely irresponsible. Far from it! The practical risks pertaining to potentially poorly maintained packages in jammy/universe and jammy/multiverse, are generally not so big. The really critical stuff (web browser, email client, etc.) is thankfully usually in the well-maintained vera/* and jammy/main.

So: is it reasonably secure to use your Mint for the full five years? Answer: yes. But is it more secure to upgrade after three years? Answer: again yes. Upgrading is just a small extra effort, so why not spend that small effort?

15. You can get quick and friendly help on the official Linux Mint forum.

16. Do you want even more tips and tweaks? There's a lot more of them on this website!