How to install Linux Mint 20.x alongside Windows

It's easy to turn your computer into a dual boot:

Create an external backup of your documents

2. Make Windows perform an error check on the hard disk. In Windows 7, you can do that as follows:
Menu - click the button Computer - click Local Disk (C:) - in the menu bar, click Properties - tab Tools - Error checking: click the button Check now... 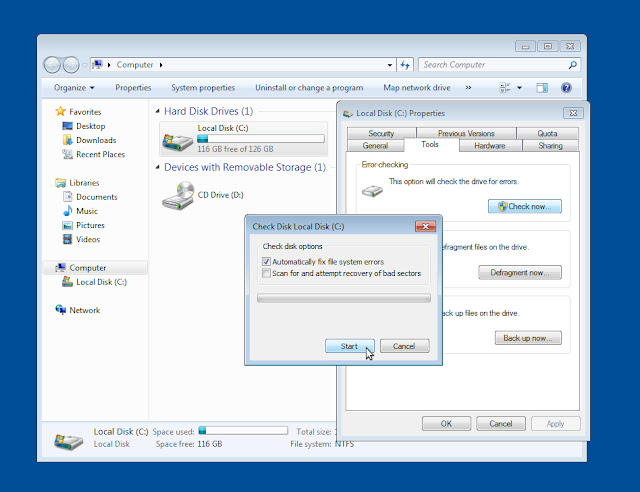 In Windows 10 the procedure is as follows:

- Swipe in from the right edge of the screen and tap Search. Or if you're using a mouse, point to the upper-right corner of the screen, move the mouse pointer down, and then click Search. Enter This PC in the search box, and then tap or click This PC.

- Right-click the drive you want to repair, and then tap or click Properties.

Note: defragmentation is unnecessary! That saves a lot of time....

- Shut down your computer.

After the installation you can reconnect all your peripherals again; they'll probably work out of the box then.

Wire your computer: temporarily establish internet connection with an ethernet cable, wired internet therefore. If you have a laptop, connect the power cord as well: you definitely don't want to run the risk of an empty battery during the installation of an operating system.

Important: the next step, step 4, is only necessary for computers with Windows 10 (and 8.x). If you have Windows 7 or older, then skip step 4 and proceed with step 5.

Windows 10: change a couple of settings

4. For Windows 10, you have to do some settings changes before you can install Linux Mint next to it. Don't omit them; they're essential!

5. a. Boot your computer from the Mint DVD or USB thumb drive (are the BIOS settings OK for booting from that?), and choose "Check the integrity of the medium", thus performing an integrity check on the DVD / USB thumb drive. The DVD has to be completely error free. If it's not, burn a new DVD at low speed (4 x).


b. A few seconds after a successful completion if the check, the Mint DVD will boot automatically. In the trial (live) session you can find out if all your hardware works like it should. Note: in the live session Mint functions much slower than usual!


c. You can start the installation by clicking the special desktop shortcut for it, called "Install Linux Mint". The installer will start by asking you a couple of questions. Only after you have made a choice for partitioning, installation will begin.

You'll be presented with this window (click on the picture to enlarge it): 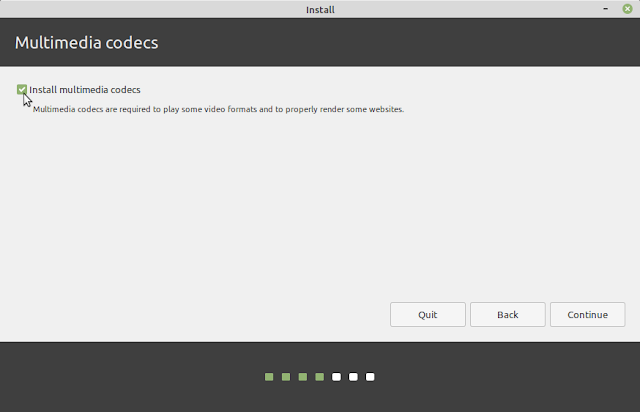 Because the option "Turn off Secure Boot" in the installer is a bit cumbersome: further on it'll force you to jump through some annoying hoops. Nonsense like: "type the third and the sixth letter of your disabling password".

Turning off secure boot in the UEFI (BIOS) is easier. Afterwards you can start the installation of Linux Mint anew. 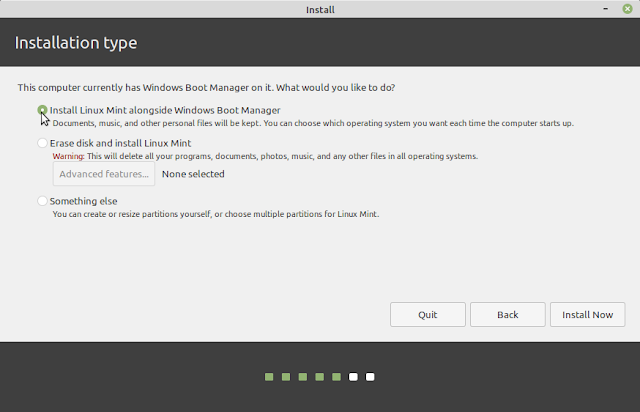 Note: When you don't have much experience with Linux yet, then do not select the LVM option in the Advanced features! Because that drastic option is only meant for advanced Linux users. This option can cause a lot of trouble for people with little Linux experience....

The Encrypt option is also potentially risky; only use it when it has a clear security advantage. For example on a computer that sometimes leaves your house and which contains sensitive information (like a laptop that you take with you to your work).

But don't apply the Encrypt option on a computer that's always in your house, like a desktop computer which is only in use by you and your family.

The disadvantage of encryption is, that your important data will be forever unreachable when you, for example, forget your password. Encryption is a very powerful tool; like all powerful tools, it should be handled with care.

6. Doesn't the installer offer you the option to preserve Windows and install Linux Mint alongside Windows? Then cancel the installation and have a look at this potential solution (written for Ubuntu, but applicable in Mint as well).

7. One of the last questions will be a disk partitioning proposal. The installer will namely propose to free some space on the hard disk. Thus leaving somewhat less space for Windows, and allowing Mint to be put on the cleared space.

Don't worry: the installer respects the disk space that's already used by Windows files, and only proposes to divide the remaining unused space on the hard drive. 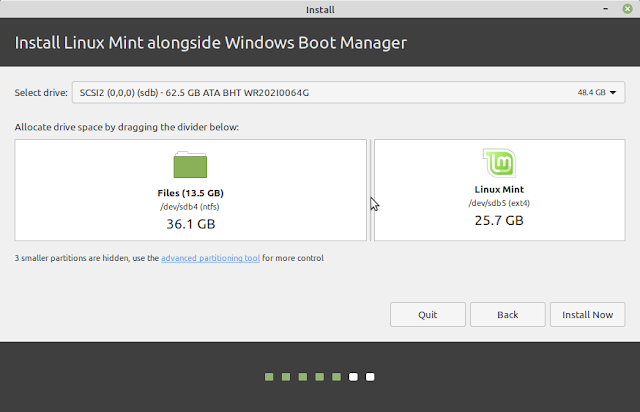 The mouse pointer is at the divider: move the divider at will. Your new Mint is on the right side.

Note: Give Mint preferably no less than 20 GB. Mint is the block on the right.

In other words: the installer assumes automatically (by default) that you don't want to wipe Windows and that you want a dual boot computer. Mint is user friendly!

Note: Can't you finish the installation because it stalls halfway? Then maybe removing the slideshow can solve it (item 4).

Now the installation of Mint takes place, and in the end you'll have a dual boot computer.

Is there no boot menu and does Windows 10 start rightaway?

8. On modern computers who were sold with a pre-installed Windows 10, sometimes you don't get to see a boot menu after a seemingly succesful installation of Linux Mint. Instead of that, Windows boots rightaway, just as if no Linux Mint has been installed at all.

Usually you can fix that by another change of the configuration of the UEFI (BIOS). In the "boot options" of the UEFI, find the item "OS boot manager". Select it, press Enter and place Windows Boot Manager at the bottom (for HP laptops you can do that by means of the F5 key). Note that Linux Mint might be called "Ubuntu" by the BIOS.

See the screenshot below, of the relevant part of the UEFI settings of an HP laptop (click on the image to enlarge it): 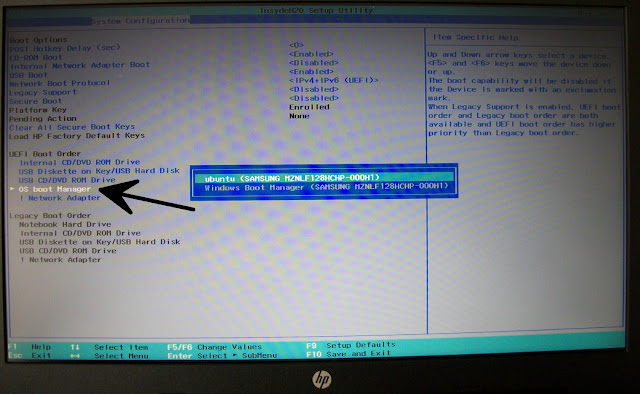 Note: in the UEFI settings of an Acer laptop, I've seen a weird problem: after installation of Linux Mint, there were two instances of Windows Boot Manager in the boot priority. It turned out that the second one was actually the Linux Mint bootloader.... So all I had to do was to put that one on top of the list.

Windows has to adjust itself

9. The first time you start Windows in the dual boot configuration, Windows will discover that its disk space has shrunk. Windows has to adjust itself to that.

During the first Windows boot you might therefore see a blue screen with white letters, informing you that Windows is checking the hard disk and "repairing" it with the application CHKDSK. Simply let it do its job.

Afterwards Windows will want to reboot. Go along with it. Then Windows will be used to its new disk space and will function normally.

10. There's a very annoying peculiarity in Windows. When Windows updates itself, it might (unseen, automatically, unasked for) change the boot order (boot sequence) in the BIOS. And put the Windows bootloader as the first entry, even though you had set the Mint bootloader (Grub) as number one....

With the Windows bootloader in first position in the BIOS boot order, Windows will boot straightaway. You won't see the Grub bootloader menu again, until you enter the BIOS settings (boot section) and move the Linux entry from position number 2 back to position number 1. For the procedure, see item 8 on this page.

Something else that sometimes happens after Windows has updated itself, is a blue box that states "no boot device found" when you turn on your computer. A hard reset will result in a boot to Windows. Same fix: you must enter the BIOS settings and change the boot order again.

11. That's it! You're done. Now you can reboot into Mint and start polishing your new operating system. Mint comes in several desktop editions, so I've made three different pages:

The tips and how-to's on this website are primarily written for Linux Mint 20.3. But you can also use them in Ubuntu 20.04.x, provided that you do this first (*click*).